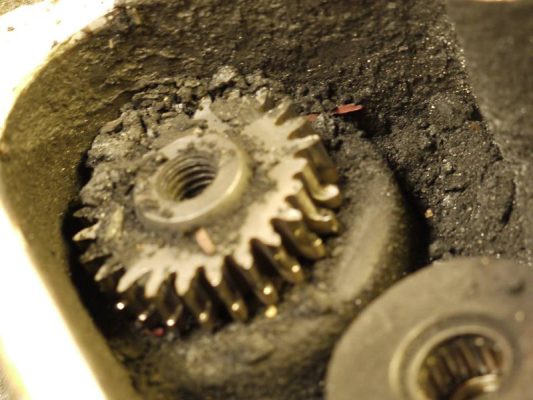 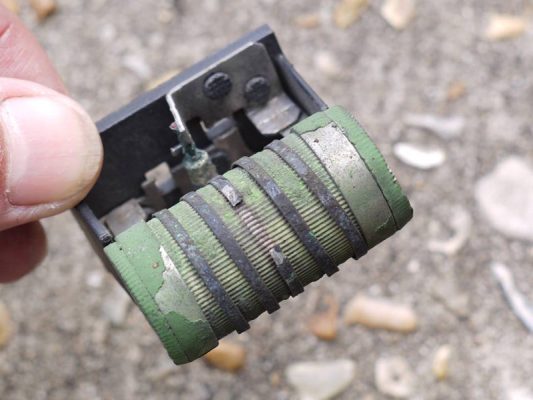 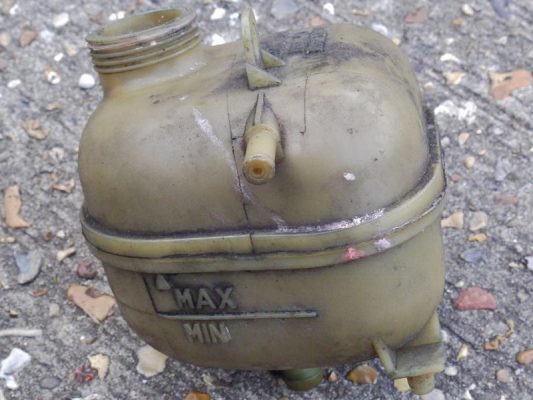 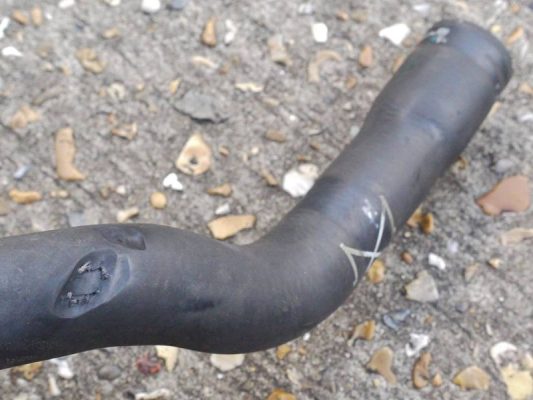 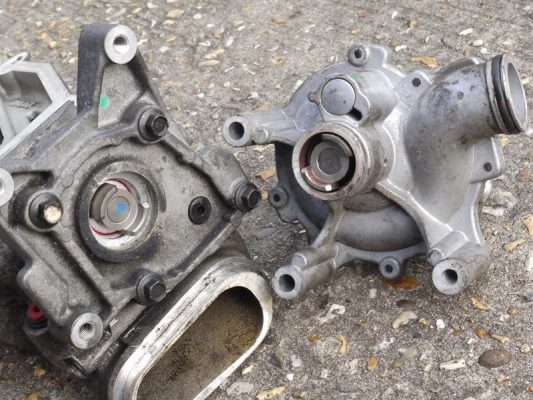 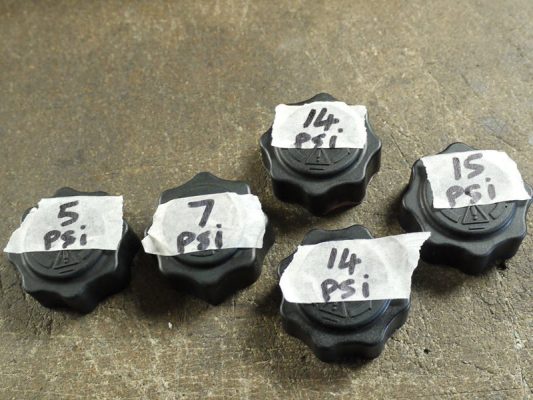 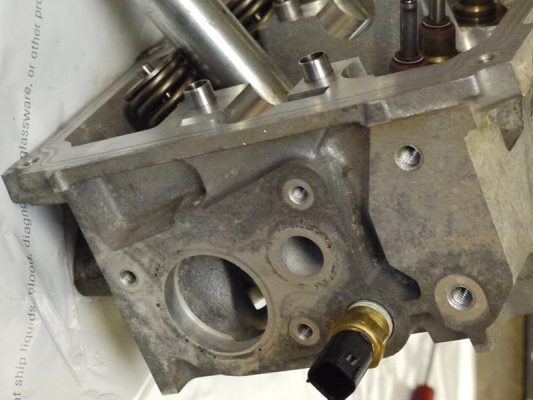 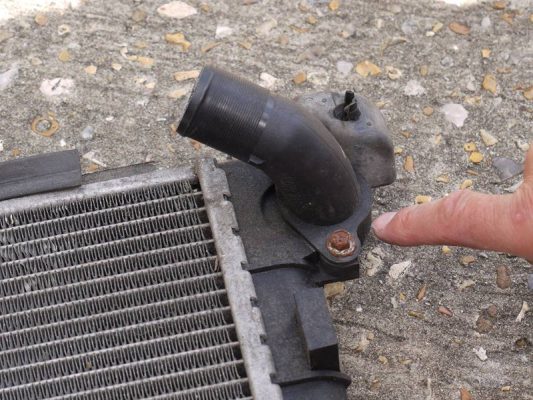 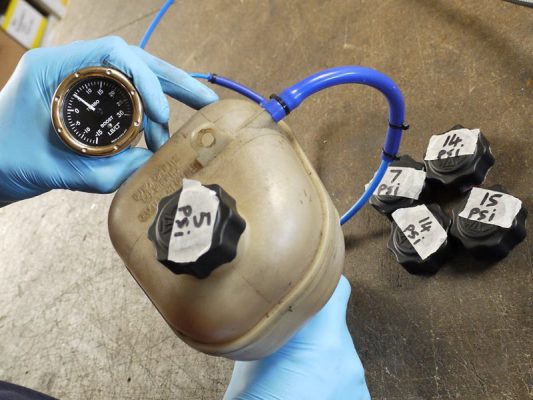 The standard R53 supercharged Cooper S cooling system is actually quite conventional in its approach apart from just a couple of unusual design features. Foremost is the drive to the water pump. Unlike most cars (Cooper included) it is not run via belt and pulley, but directly off the back end of the supercharger. So if the SC is turning so must the water pump be right? Well yes it should be, but the gears in the tiny integral SC gearbox lose oil eventually due to leaking seals, then the gears/bearings destroy themselves very quickly leading initially to excessive SC noise, and eventually total loss of mesh between the 2 gears. No drive to water pump will blow the head gasket in minutes! …See MM recent SC article if you have these problems.
Being a supercharged engine it also features a pressurized header tank or expansion tank as it is correctly termed. It also features a thermostat housing mounted on its side directly bolted to the cylinder head, and a 2 speed fan that uses a high current resistor to achieve the low fan speed.
Ok before we get to the nitty gritty of common faults, why they occur and how to fix them, I thought I would list a few interesting ‘did you know’ facts about antifreeze and water that are often misunderstood.

‘SO WHY DOES MY EXPANSION TANK KEEP CHUCKING WATER OUT’?

This is the single most asked question. The reason being most people just ignore the cooling system unless they are either (A) stuck on the side of the road with a blown head gasket (system over pressurizing) or (B) the car is losing water even though the head gasket is ok.
The reasons for (B) seem to baffle many. There are a few simple reasons and relevant fixes. The first thing to confirm is no water leaks! These can come from many places …here are just 9 of them:-

Most of these you can check yourself and need no further explanation. However the tank cap and radiator fan need more explanation.

The standard cap is notorious for opening too early. In effect a cap that opens at 3 psi allows the coolant to boil as low as 105 deg C. Even with a first fan cut in temp of 105 deg C boiling over can occur. Combine this cap problem with a first stage radiator fan that’s not working at all, and boil over is guaranteed. Our simple test rig using pump, pressure gauge, tank and various cap samples shows large variations in cap opening pressures. They ‘should’ all open at 15-16psi.
Just a quick reminder here about coolant level as coolant expands naturally when heated it is important to fill the system only to the max mark ( about half way up the tank ) on a fully cold engine on level ground and engine off, and do ensure cap is fully tightened down. For safety reasons never remove the cap with a fully hot engine

We have just launched an up rated version of our original GTT header tank. Whereas our normal version does eliminate problems such as the plastic tank splitting, it still utilizes the original plastic cap. With the new ‘Pro’ version we incorporate a CNC milled bayonet fitting neck with accepts (and includes) a much better Japanese style pressure release cap. These are all metal, available in three different pressures (13 16 & 19psi) and are far more reliable. The other big advantage is it allows you to run the included overflow pipe to a bottle, rather than the coolant spilling inevitably all over the engine bay. Coolant expelled at high speed using the standard cap results in the very slippery antifreeze running along the underside of the car and depositing itself on the rear tyres……The result? A potential 360 degree spin or worse. The GTT tank fits in the original fixing points and has internal baffle plate to prevent airlocks during fast cornering.

The operation is ECU controlled by 2 relays, 3 fuses and a high current resistor. Add in air-con related fan functions and the wiring becomes even more complex. In theory once the air-con is at a certain pressure the radiator fan should run at low speed. The easiest way to check basic functions is connect up to a scan gauge or laptop through the OBD2 port and select water temp to monitor. You can even use the cars own display to pull up coolant temp if you want. With air-con OFF let the car warm up until at 105 deg C the low speed fan SHOULD cut in, then out again after around a 4 degrees temperature drop. Don’t be surprised if it doesn’t work, failure of the low speed resistor is VERY common. It is hidden deep inside the front modular radiator housing. It is a green cylinder around 4cm long 2 cm diameter. Usually all the wires are burnt out and broken. Cheap replacement can be had on e-bay .The next cut in point is 112 deg C. This high speed cut in point is essential that it works. If you get to 115 deg C and still no fan, then turn off the engine as water is going to coming flying out very soon. Check those fuses/relays/wiring and fan itself before proceeding. Assuming it cuts in at 112 deg C then and as long as all else is ok, including the cap opening pressure (very important) most cars will run fine and won’t boil over. Believe it or not this scenario represents half the earlier R53’s on the road.

There are a few simple tell tale signs to look for here. Think of the engine as a pump. If there is a leak here then gasses are pumped into the coolant system, and likewise water is also drawn back into the combustion chambers. Leaks can occur in many places therefore exact symptoms can vary. The gasket is actually a good design, so failures are not too common, therefore when replacing one you MUST determine why it failed in the first place. If you don’t do this another gasket failure will occur soon after.
Common Symptoms are:-
Excessively hard top radiator hose.
Milky deposits under the oil filler cap/ oil in water.
Steam from the exhaust tailpipes.
Exhaust gas present in the header tank (sniffer test required).
Running on 3 cylinders. Or any combination of the above.

TEMPERATRURE GAUGE……DON’T BE FOOLED!
The standard gauge is deliberately ‘centre weighted’ by BMW. In effect this means even with coolant temperature variations of 30 degrees, the needle still stays nice and calmly resting in the centre position irrespective of what’s really happening. One would guess it’s done to stop people complaining of an engine fault should the gauge be slightly off centre marker. In truth they have just centre weighted it way too much. ..It’s the ‘BMW Blindfold’
Written by Roland Gardiner of GT Tuning Ltd